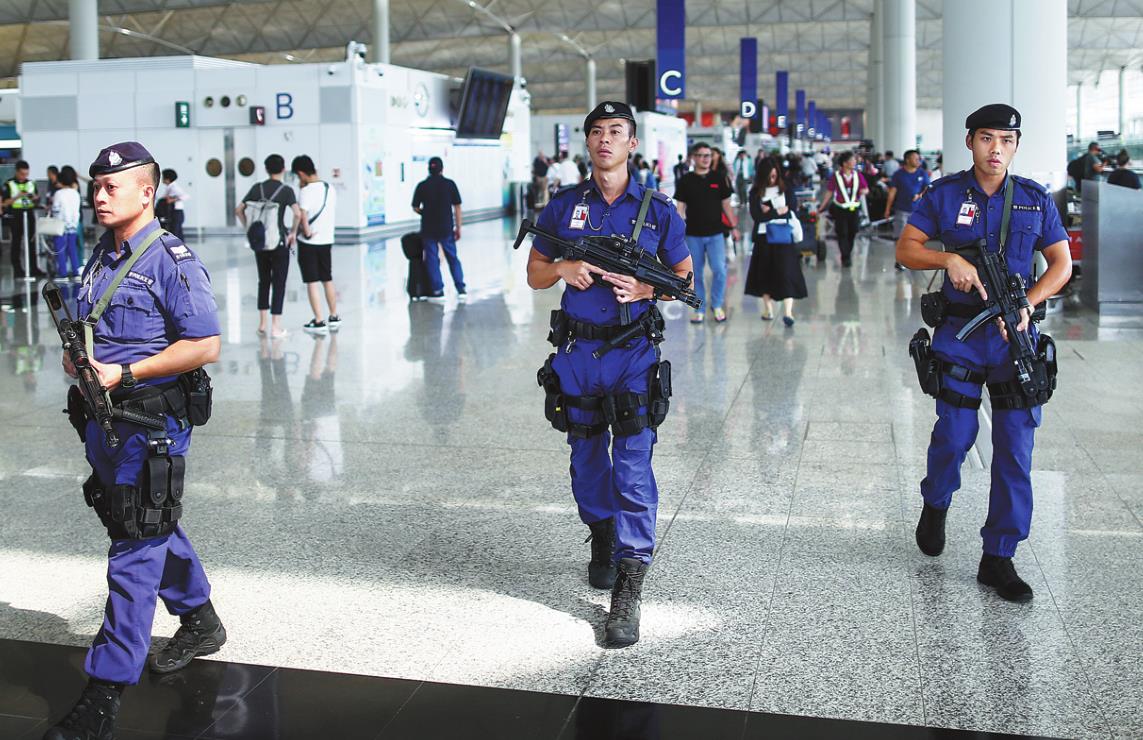 The order, requested by Airport Authority Hong Kong, prohibits any person from unlawfully and willfully obstructing and interfering with operations at the airport, according to a statement issued by the authority on Wednesday morning.

The Liaison Office of the Central People's Government in the Hong Kong Special Administrative Region and the State Council's Hong Kong and Macao Affairs Office responded to the violence at the airport.

Two mainland residents were illegally detained and beaten on Tuesday night by radical protesters who occupied and crippled the airport. The two are a Global Times reporter and a Shenzhen resident who was accused of being an undercover police officer from the mainland. After the assault, the two were taken to local hospitals for medical treatment.

"The atrocity has totally gone beyond the bottom line of a civilized society, which is no different from terrorists' acts," the Liaison Office statement said.

The office pointed out that the protesters' acts, including paralyzing operations of the airport and harassing passengers of various nationalities and ages, severely hurt others' rights and damaged Hong Kong's international reputation.

"This time the protesters have torn down their deceptive masks of 'peace, rationality and nonviolence'", the statement said.

The liaison office pledged that it will continue to stand behind relevant authorities to safeguard the personal safety and legitimate rights of mainland residents in Hong Kong.

In a statement, Xu Luying, spokeswoman for the State Council's Hong Kong and Macao Affairs Office, said the central government supported the actions of Hong Kong police to arrest the rioters.

Xu said the violence at the airport Tuesday night was particularly shocking.

"Recently, the radical violators in Hong Kong have completely breached the bottom line of law, morality and humanity. Their flagrant acts of serious violent crimes in public are shocking and chilling," her statement read. "Their violence was an extreme contempt for the rule of law, which has seriously damaged Hong Kong's international image and hurt the feelings of compatriots on the mainland."

She said such violent crimes must be severely punished according to law.

"We firmly support the Hong Kong police force and the judiciary in carrying out resolute and strict justice and bringing criminals to justice as soon as possible," she said.

Shortly after being discharged from Princess Margaret Hospital in Hong Kong on Wednesday, Fu Guohao, the beaten reporter from the Beijing-based Global Times, said he did not have serious injuries.

Fu, with some bruises on his face, said he still loves Hong Kong and is grateful for the public's care.

The Global Times sent Fu to Hong Kong to cover the mass protests there. He had his hands and legs tied up and was abused by a group of radicals at the airport on Tuesday night, as those in the mob suspected he was a fake journalist.

In a statement, the Democratic Alliance for the Betterment and Progress of Hong Kong, the city's largest political party, said that what the protesters did to Fu was "reckless" and tainted Hong Kong's reputation in the international community.

The Federation of Trade Unions, the city's largest union, also denounced the violence, saying that what the rioters did was lawless and in defiance of the city's rule of law and moral and ethics. They were the shame of Hong Kong, the statement said.

Hong Kong police arrested five men at the airport on Tuesday night on suspicion of offenses including unlawful assembly, possession of offensive weapons and assaulting police officers, according to Mak Chin-ho, assistant commissioner of the Hong Kong police.

The five who were arrested were not directly involved in the assaults on the two mainland residents, said Tse Chun-chung, superintendent of the public relations branch of the Hong Kong police.